TMS Analytics & Physics library is a set of classes that provide functionality for building powerful math and engineering applications with Delphi IDE. In the new version 3.3 of the library, we introduced special FNC physics components to take advantage of Delphi’s rapid application development.
In this article, we’ll consider the base concepts of the FNC physics components and provide information on how to work with units of measurement.
Let’s consider the following FNC physics components:
To begin an FNC physics application we first need to put a TFNCUnitProvider component on the form. The component has the following published properties:
When you put a TFNCUnitProvider on the form in design-time, it automatically finds all registered quantities, prefixes, and units. The collections of these items are not editable, they only provide information about available physical entities. When an item is selected in a collection, its properties are shown in the Object Inspector.
In the picture below, you can see a collection of physical quantities: 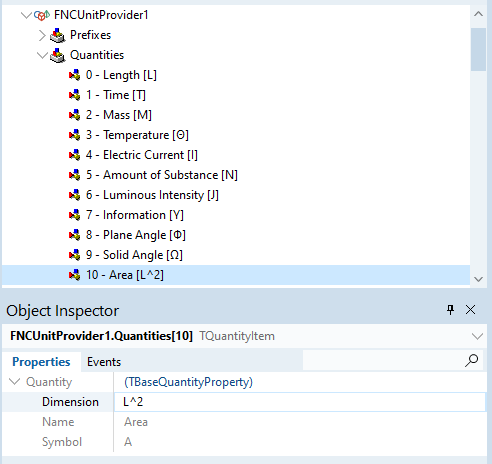 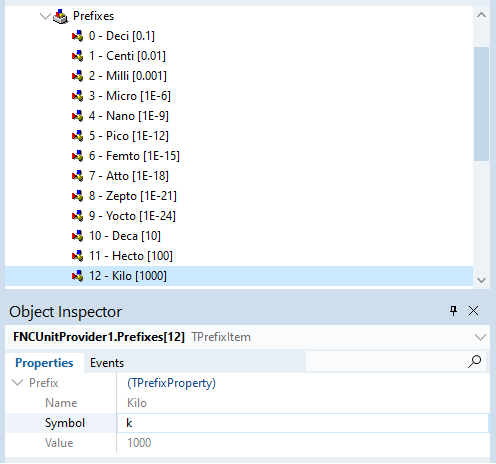 A prefix provides the following properties:
And finally, you can view all available units of measurements.
Any unit provides the following properties:
The unit provider component supplies the physical entities to other components, for example, to the TFNCUnitConverter. This component is intended to convert physical values measured in two different units and has the following properties:
First of all, you need to assign the ‘Provider’ property to set up the physical environment for unit conversion. Next, you have to assign the units for the conversion. The ‘TUnitProperty’ class has several published properties:
The only property you can modify is the ‘Symbol’. When you set a new value of the symbol, all other properties changed according to the input. If the input is not correct, the ‘Error’ property is assigned as shown in the picture below.

Conversion between two units of measurement can be done only if the units have the same physical dimension. When you assign the units to a converter component, it compares the dimensions and, if the units are not compatible, assigns the ‘Error’ property as shown in the following picture.

When the units are assigned and are valid for conversion, you can change the ‘Value1’ and ‘Value2’. When the first value is assigned, the component converts the value from the first unit of measurement to the second one and assigns the second value. In the picture below, we showed the conversion of 10000 square millimeters to squared feet.
You also can change the unit symbol and see how the converted value changes. As an example, here is the conversion of 10000 square millimeters to square inches. 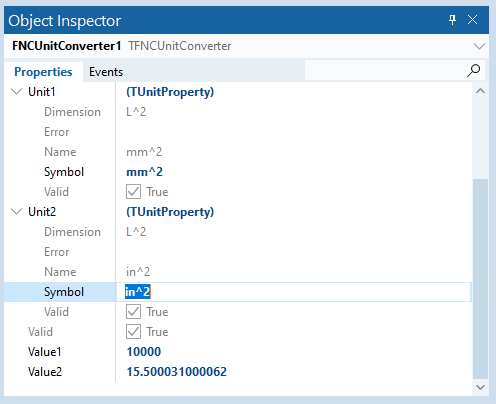 The last property of the TFNCUnitConverter we have to mention is ‘IntervalConversion’. It switches the component between two modes of conversion. By default, the value of the property is ‘False’, and we have so-called value conversion, when it is ‘True’, we have the interval conversion. Let’s consider the difference between the modes for temperature units of measurement. 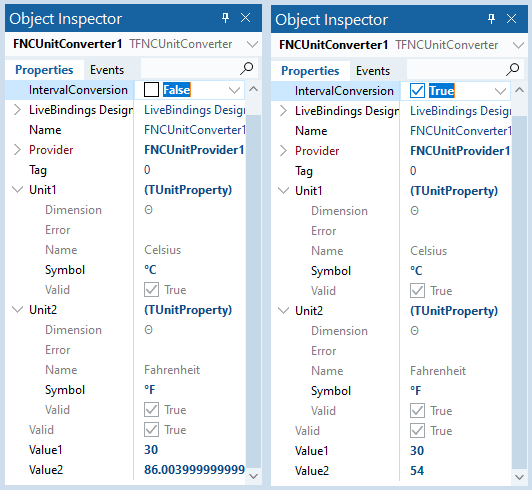 In the picture above, we showed two conversions of temperature from Celsius degrees to Fahrenheit degrees. In the first case, the value conversion was used, and we see that 30°C = 86°F. On the other side, when we do interval conversion, we see another result 30°C = 54°F.
Now we can create a simple unit conversion application. We added four TEdit components on the form – two for units and two for values, and one button with the following click handler:
The resulting unit conversion application in run-time is shown in the picture below.

The source code of the demo project for the article can be downloaded from here . To start developing your FNC engineering and math application you need the latest versions of TMS Analytics & Physics and TMS FNC Chart products.