This article is primarily concerned with the Delphi IDE and shows how to use hidden features to accelerate the work with the IDE.

TMS WEB Core uses the Pas2JS transpiler in order to convert the Pascal code to JavaScript. In the following the transpiler is abbreviated with Pas2JS.
Pas2JS is basically compatible with the Delphi language, but there are exceptions. Because of these exceptions the Delphi IDE sometimes does not work correctly with some basic features like Code Insight.

Code Insight is a feature of the Delphi IDE that helps the user to write his code faster. Code Insight includes Code Completion, Parameter Completion, Code Hints, Tooltip Expression, Tooltip Insight, Go To Definition, Block Completion, Class Completion and Error Insight. It can only work if the current project is a Pascal project that can be compiled with the Delphi Compiler.

The Delphi Compiler is the so called DCC (Delphi Commandline Compiler) which normally compiles Delphi projects. In case of a TMS WEB Core project things are different. A TMS WEB Core project is compiled with Pas2JS, not with the DCC. This behavior has consequences for Code Insight, which only works for projects that can be and are compiled with the DCC.

TMS WEB Core has a wonderful hidden feature that allows the user to compile WEB Core projects additionally with the DCC. This feature can be enabled in Tools\Options\TMS WEB\Options.

If Show the DCC button is set to True a tool button will appear in the tool bar, which allows to toggle between the DCC and Pas2JS. 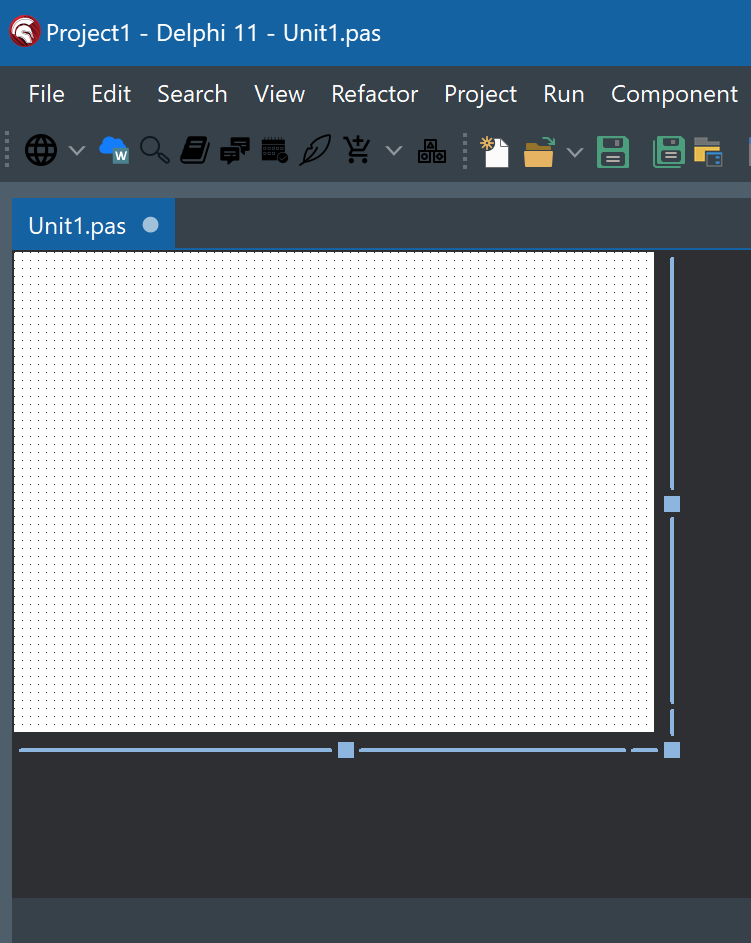 Here, Pas2JS is enabled. A compiled project looks like the following: 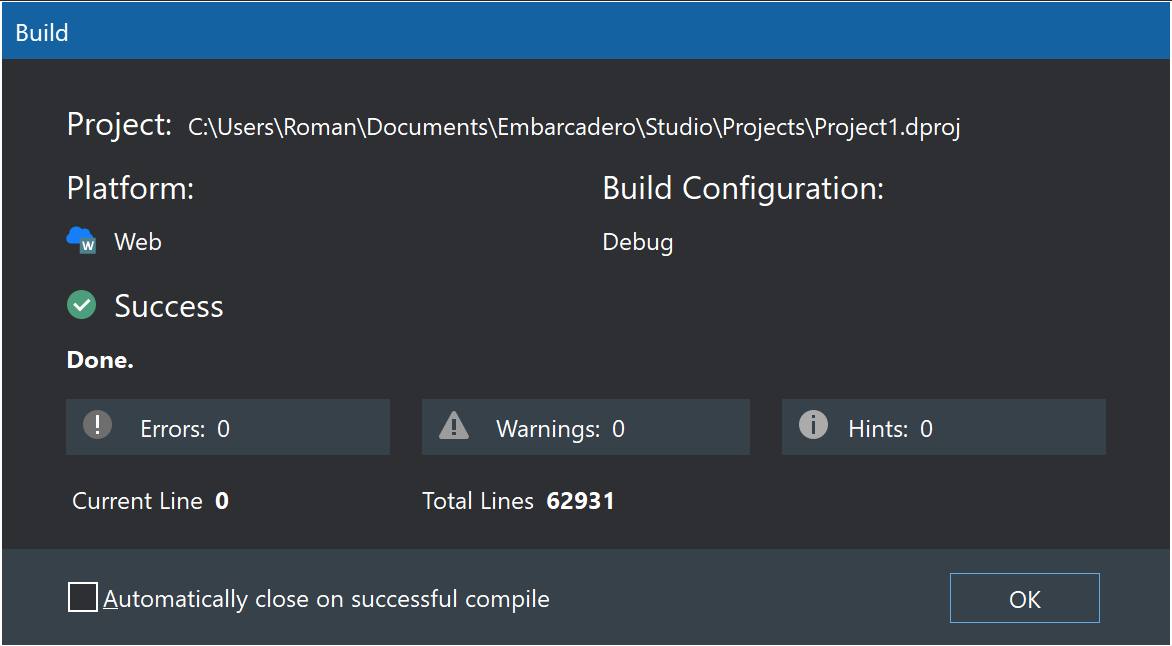 And here the DCC is enabled: 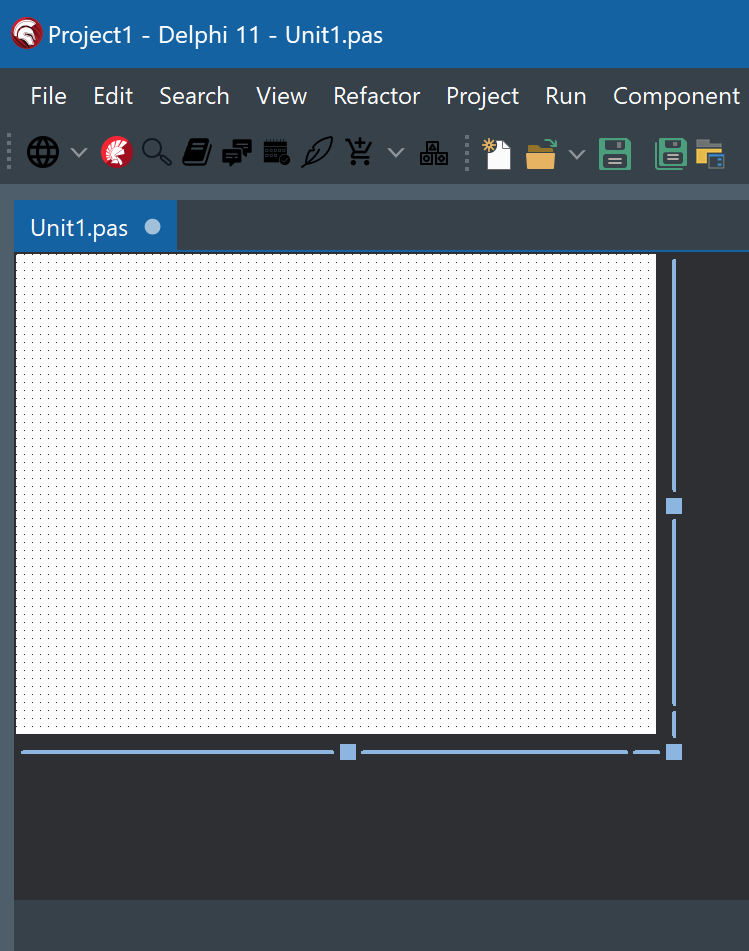 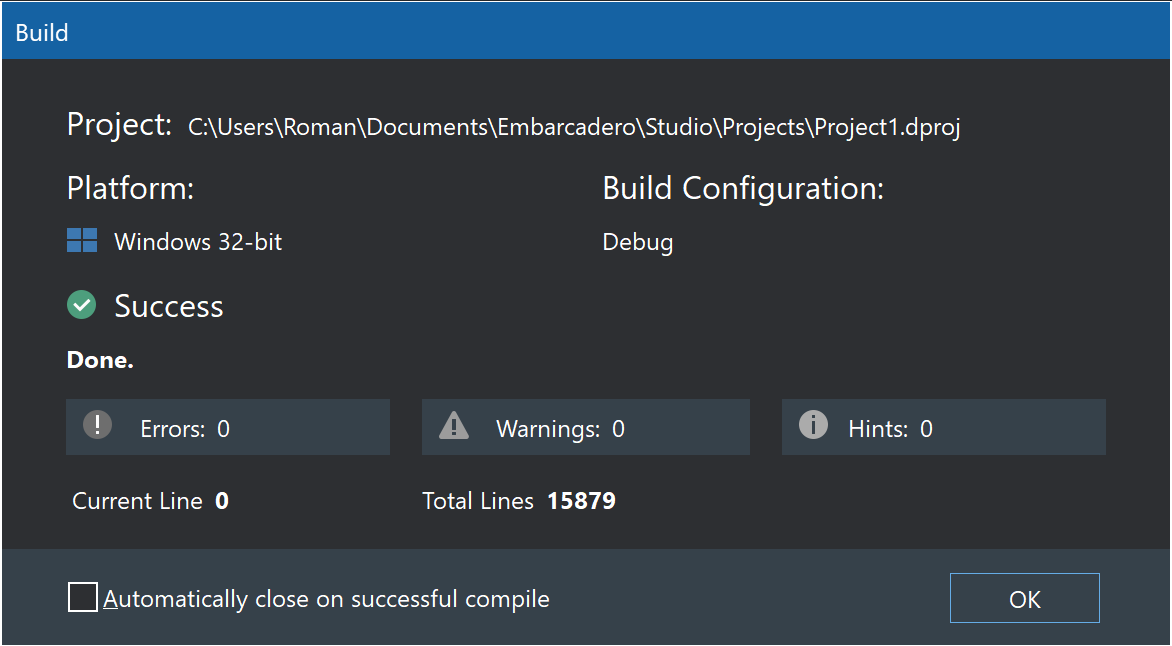 If the project is compiled with the DCC, code completion looks like this:

Since the DCC is one of the fastest compilers in the world, it compiles much faster than Pas2JS. Hence it is a good practice to compile a WEB Core project with the DCC during coding. The user can always check with a click on Ctrl+F9 whether his code is compilable.

Pas2JS introduces a few special language features that cannot be compiled directly with the DCC. In the following it will be shown how they can be written in a DCC compatible way.

Pas2JS allows to write plain JavaScript in so called “ASM blocks”. Here is an example:
With the help of the internal compiler defines WEBLIB and PAS2JS you can write this code in the following way:
This code now compiles and works with the DCC and Pas2JS.

The counterpart of many utility functions from Delphi’s System.SysUtils unit are currently defined in the Pas2JS unit WEBLib.Utils. With the upcoming version 2.2 of Pas2JS they will be moved to SysUtils. That is why it is currently necessary to use WEBLib.Utils.

Although Pas2JS does not know the System namespace, it is allowed to use it:
This is a valid uses clause for Pas2JS and the DCC. The same can be done with the Vcl:
The supported namespaces are

JavaScript applications may be asynchronous. Therefore Pas2JS supports the Await keyword. The whole mechanism is explained in this article.
The best way to write asynchronous functions in a DCC compatible way is to use the Async attribute and the generic TAwait record.
Now the asynchronous code is fine with the DCC.

I hope this article helps to write Pas2JS code in a Delphi compatible way so that all IDE features like Code Insight can be used. The other huge advantage is that the DCC is much faster than Pas2JS, which helps to reduce the so called “turnaround times”.
A last remark is that in this case the well known and often used IDE plugin ModelMaker Code Explorer also works.

2. Friday, April 22, 2022 at 12:32:28 PM Hi Masiha,
Thanks for the post but when I use DCC for current projects I get a lot of compiler (more that 100 in just one project) errors. It seems that this flag should be switched on when starting from zero as it is very time consuming and not practical to satisfy DCC after progressing on the project.

how do the compiler errors look like? Does CodeInsight currently work for you?

5. Monday, April 25, 2022 at 12:15:22 PM There must be more to this as I cannot see this here, for example in the demo Demo\Basics\MultiForm where I could not see a code insight problem while await() is used.
Do you have more details how we can reproduce this?

as described under "3.4. Await" replace all "async" keywords with the attribute "[Async]" and use "TAwait.Exec<>" instead of "await". This approach is BTW compatible to the MMX.

Do you have an example for such a typecast?

if I code it like this there is no more complains by DCC:
Response := TAwait.Exec<TXDataClientResponse>(XDataWebClient.RawInvokeAsync(''IUserAccountsService.Signin'', [AUsername, APassword]));

So I thougth these were due to Awaits, I may be wrong.

the use of "TAwait" is correct. Please don''t forget about the "[Async]" attribute.

BTW, if you use an async procedure "TAwait" makes problems. Sometimes it is easier to change the procedure into a function that simply returns true. In this case "TAwait" does always work, even without the generics.

this is great to hear!