Customer use case: bringing an FMX app to the web with TMS WEB Core 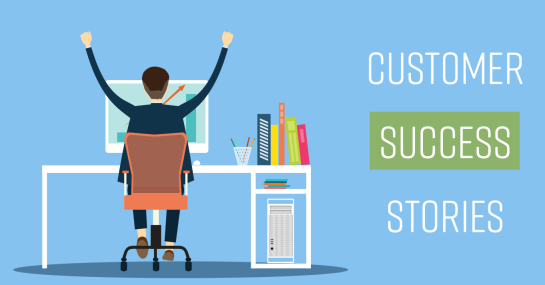 In this blog article, we want to present you the story of Howard Sanderson from the company Star Analyzer. Howard converted in the past couple of months his cross-platform FireMonkey app to a TMS WEB Core powered web application and hereby eases the life of his customers tremendously.

After years of marketing a Delphi Windows/macOS version of my Star Analyzer program, I found that many clients wanted a web-based program which would run on any device, especially a tablet. They also wanted their data stored in the cloud so that several people could use the program at the same time. The macOS version produced by Delphi was often plagued with macOS incompatibilities, and neither version would run on a tablet. So I decided to take the leap to the web.

Should I use Delphi and TMS WEB Core or learn another programming language?

I looked at most of the current web programming languages, and took a short course on several of them. But because I’ve been using Delphi for 25 years I find that my brain is rather hooked on Delphi. In fact, I think that JavaScript and other web languages are totally incompatible with my brain.
Another deciding factor was the library of 85 Object Pascal code files that I developed over the years for use with all my programs. I definitely did not want to rewrite my library from scratch. I am rather fond of it. My Star Analyzer program included another 100 Object Pascal code files which all use my library files.
Given the above conditions, I decided it would make sense to use TMS WEB Core to write my new web-based program in Object Pascal rather than to start from scratch in some other language. While there was a bit of a learning curve, the final program is  quite lovely I think. You can see Star Analyzer by going to my website, www.StarAnalyzer.com, scrolling down the page a bit, and clicking the "Run The Program" link.

Eight reasons I decided to use Delphi and TMS WEB Core

So far I have not needed to write a single line of JavaScript or HTML code, and about 80% my existing Delphi code works nicely with the WEB Core components. Some of 20% of new code I had to write was relatively straight forward, and some was a bit tricky. I’ll talk about the tricky parts a bit later in in this Blog.

As we all know, the components on the forms talk to your code through their event handlers. Theoretically then all I would have to do is create new forms, drop FNC and WEB Core components on the new forms, and use hook them up to most of my existing code.  Not too much work, or so I thought, but it turns out it was not quite that simple.
If you look at Star Analyzer for the web you’ll see that it is built around tab controls. Click Data Entry and Data Analysis button and you’ll find there are 15 tab controls on the main form and 18 tab controls on the tabs on the main form. The original program was built around one large and complicated main form that held all the components for all 33 tabs, but the program worked nicely, and was easy to code and trouble shoot.
In converting my program to WEB Core, I first duplicated this tab structure using the TTMSFNCPageControl. The new layout looked just like the old layout, and was easy to work with in programming, but it would not compile. It turns out that you can’t compile a program with thousands of components and 33 tabs on one main form. It chokes the compiler.

Using Hosted Forms to reduce the complexity of browser pages

The solution was to use a TTMSFNCTabSet (which has no pages, just tabs) and to use a hosted form as shown in the TMSDemos\Web\Basics\Formhosting demo provide by TMS. The text and number of tabs on the main TabSet are changed in code, and the controls that used to be on the tabs are now on a Hosted Form.
In the image below the area outside the red box is the main form, while the area inside the red box shows one of the 23 different Hosted Forms. The advantage of Hosted Forms is that each web browser page has a small number of components and on it. 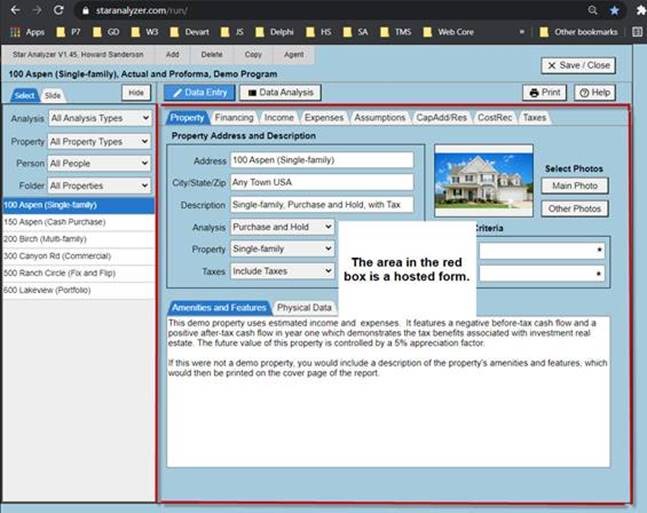 This Case statement below shows how the hosted forms are called and created by the program.

In addition to the Hosted Forms mentioned above, every program needs pop-up forms as shown below. Forgive my wife and my cat in the images. This is just a demo after all. You can import photos and even take photos on your iPad with the TMS components. See the TMSDemos\Web\Basics\Multiform demo for details on creating pop-up forms. 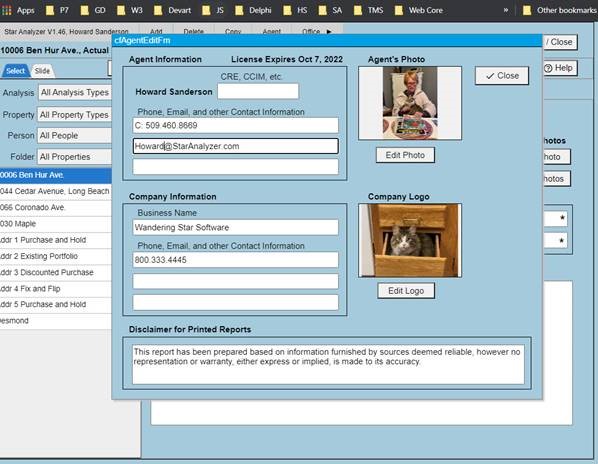 Why I chose Google Firestore as my online database

My original Star Analyzer program used a local SQL database and the FMS FNC Cloud Pack to allow users to backup and restore their data to Dropbox so that they could use multiple computers, one at a time, with their data. This confused a lot of users. Not a good solution.

Without the TMS Firestore components I never would have chosen Firestore. If you go to https://firebase.google.com/
and begin reading the hundreds of pages of Firestore documents you may find it overwhelming as I did. Or perhaps not. But I wanted a relatively simple solution, and did not want to learn another programming language. I know that you can write Java Script routines that work with Firestore, but as I said, Java Script is incompatible with my mind.
Beyond ease of use, I was looking for an inexpensive cloud database solution. Look at https://firebase.google.com/pricing
you’ll see that Firestore is free at first, and then inexpensive as your needs increase. You can write 20,000 documents and read 50,000 documents per day for no charge, and after that it is only $0.06 per 100,000 reads. Given my customer database, and the fact that each customer will never have more than 100 documents in their database, I’ll probably never have to spend a penny on cloud storage.

Learning to use the TMS TWebFirestoreClientDataset

It is probably best to start by reading the TMS WEB Core PDF help file, which is well written and fairly comprehensive. Next you should look at the TMS Blog entries on Firestore. And finally, you can look at the Demos\Web\DBBackend\Firestore as a simple example to learn the basics.
At first you may find the lack of SQL query capability in Firestore to be a bit disturbing, but you’ll find that there are ways around most of the limitations. One limitation of Firestore is that the maximum document size is 1 Meg, so if you are storing photographs you’ll need to shrink them a bit. And that brings me to my next topic, hints and tricks in using WEB Core.

As you work with TMS WEB Core you’ll find little tricks that are not emphasized in the documentation. Here are a couple that I’ve found useful.
Tip 1: Selecting and Resizing Images
There are two images controls that I use with WEB Core, the TTMSFNCImage and the WebImageControl. The TTMSFNCImage can show images in their proper Height and Width Ratio (which I like), while in the TWebImageControl the image always takes the shape of the control on the form (which I don’t like).
However I can resize images with the TWebImageControl and not with the TTMSFNCImage. Since the Firestore database can’t handle images larger than 1 Meg, you must resize all images larger than that. The best way to see this is in a demo program, which you can download from www.StarAnalyzer.com/TMS/ImageSel.zip and you can view the demo from https://www.StarAnalyzer.com/TMS/ImageSelDemo.
If you click the button or the image on the main form, a pop-up Image Select Form is shown. See the TMSDemos\Web\Basics\Multiform demo for more information on pop-up forms.
On the image select form, you can select a JPG if you are on a computer, and you can even take a photo if you are in an iPad. The image select form uses both an FNCImage (to see the image in actual height/width ratio) and an TWebImageControl to allow me to shrink JPG’s that are larger than 1 Meg. 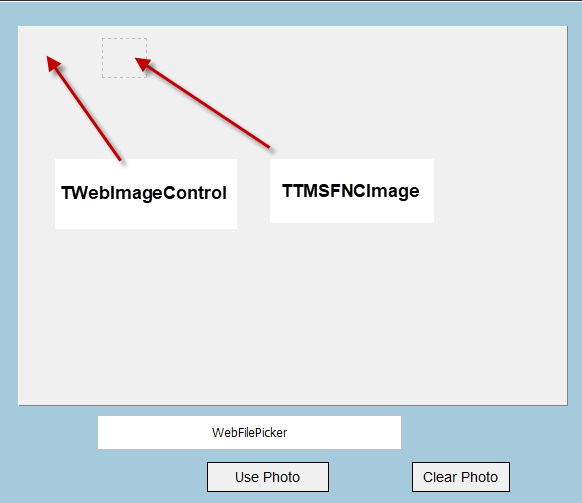 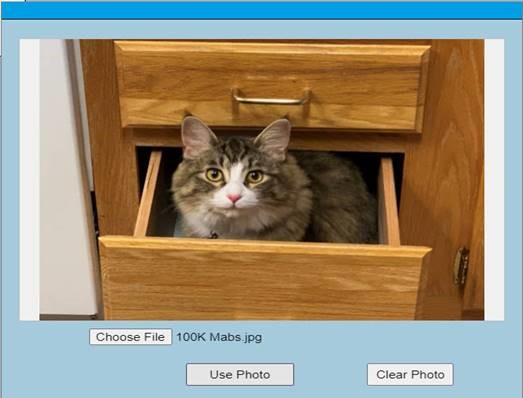 I started writing the Star Analyzer for the web before the many async/await functions were introduced in TMS WEB Core and I'm eager to investigate and start using these. But well, when writing applications running applications in the browser, one cannot change the fact there are many asynchronous processes happening in the browser all for the sake of keeping the application at all times responsive. This is also the case in Star Analyzer when opening databases. Some delays occur when reading and writing to Firestore databases. In Star Analyzer we have to open three databases when the program starts up: Agents, Images, and Properties. This takes around seven seconds. This is how I handle the startup.

We now loop while waiting for the three databases to all be open. Once all are open, we stop the timer, hide the wait message, and continue with the program.

Conclusion
Well, that’s probably enough for now. Bottom line, my Star Analyzer program now runs perfectly in any web browser on most any device, my users don’t need to download and install program updates and fight antivirus programs, and their data is available from any computer they or their assistants wish to use. I’m happy. They are happy.
Feel free to contact me at Howard@StarAnalyzer.com if you have questions that I can answer, or hints to share with me about programming with TMS WEB Core. Or more, I'm also available for remote development services for your projects and can apply my expertise with TMS WEB Core for your developments. And again, it has been fun working with you! Thanks for all the time you’ve given me.

Did you develop equally exciting projects meanwhile with TMS WEB Core? Your fellow Delphi developers for sure will want to hear & learn from it! Be in touch and we can work on bringing your success story here.