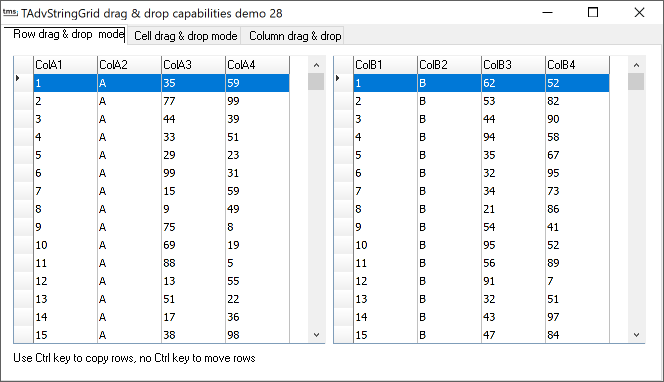 Making use of these capabilities is done through several properties and events:

Properties:
OleDropSource: make the grid act as a source for drag & drop
OleDropTarget : make the grid act as a target for drag & drop
OleEntireRows : make sure that entire row (including fixed row) is handled during drag & drop in RowSelect mode
OleInsertRows : perform automatic row insertion when rows are dropped on the grid
OleRemoveRows : perform automatic row removal if drag & drop move operation is done, otherwise the move will result in empty rows

Enabling row drag and drop is simple. OleDropSource and OleDropTarget properties are set true. In addition OleEntireRows, OleRemoveRows and OleInsertRows are set true to enable full row drag & drop. The only event used further is OnOleDrag where Allow is set true whenever the origin row of the drag operation is not a fixed row. This is necessary, as drag & drop from a fixed row starts a column drag & drop. Notice that drag & drop between grids as well as in the grid itself (to allow row rearranging is possible)

Everything under row drag & drop applies to cell drag & drop, except that OleEntireRows, OleRemoveRows and OleInsertRows are set false here.

Column drag & drop is a little more involved. This is because the interface allows for more than just inter grid column drag & drop but allows the implementation for something like a field chooser (see example project 29 ) as well.

The OnOleDragOver event is used to allow a drop of a column only when the mouse cursor is over a fixed row. Except when the grid has no columns, a drop on the fixed column is not allowed:


Finally the OnOleDragStop event is used to remove the column from the source grid if the drag & drop was a move operation:


With this little additional coding, full drag & drop of columns between grids was achieved.